Everybody loves a laugh, right? But that's not really an area I need to develop. I mean, I'm a pretty funny guy and I find and pass along my share of chuckles and giggles on a daily basis. But there's still an action here for me. 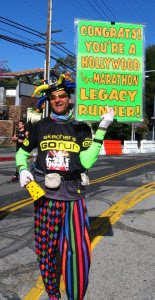 I first saw him when I ran the San Diego Half Marathon. He was standing right outside the stadium with a sign that read something like, ".1 down, only 13 miles to go!" At the time, I rolled my eyes and thought, "gee, thanks."

I saw him again as he ran past me sometime during the run. He was still wearing the full jester costume and carrying his signs, and he was running like it was just another stroll in the park. He was obviously a great runner. The next time I saw him was near the finish. His sign now let me know that I had run 13 miles and only had a tenth of a mile to go. Seeing him this time was a much better experience!

Imagine my surprise when I saw him this past Saturday in Hollywood, sharing the same encouragement and support at the Hollywood Half Marathon.

And today, thanks to Jaylene and the folks at CIC Events, I have learned more about this man.

Yesterday at The Hollywood Half Marathon, my girls and I finally took the time to stop and actually talk to him. He is an amazing guy! He runs these events and then stands at the finish line cheering on everyone coming in and does not leave until he is sure that the last runner has crossed the line.

And that, folks, is why I want to be more of a Jester. The next major event I am scheduled to run is the La Jolla Half Marathon, and I expect to run it in less than 2 1/2 hours. That means that the course will remain open behind me for at least a full hour. And at that event, after I cross the line and claim my finisher's medal, you will find me standing near the finish line and cheering in every runner until the last one has crossed the line.

I want to be a better runner. And this action will help me with that. It will also help me be a better person. And selfishly, I want to enjoy seeing the joy and pride wash over every last runner as they cross the finish line and complete their half marathon.