As promised, after I finished my running the La Jolla Half Marathon today, I stayed behind to cheer on everyone who finished behind me. Mr. Run Jester Run, Ed Ettinghausen, gave me a heads-up about what to expect.


You want to know a little secret? The satisfaction that comes from being there at the finish and cheering each runner in is rewarding beyond what words can describe. Every time someone thanks me for being there for them, I think to myself, “No, I should be thanking you!” You’ll see. I’m warning you, it’s addicting.


Action 404 - Experience A Different Race. And I really did. As I wrote on a status update today, if you want excitement, watch the winners of a half marathon. If you want to see pure emotion, watch the last finishers across the line. 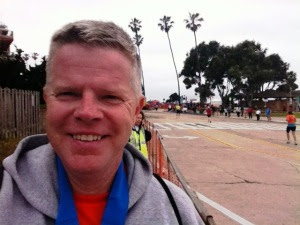 I did that today and it was amazing. I saw experienced runners that, I imagine, were recovering from injuries and were way behind their usual pace. I saw first time runners, many at the beginning of their physical fitness journey, struggling to keep moving. And I saw more than one runner being carried, literally, arms wrapped around the shoulders of two other runners and all moving together towards the finish line.

I cheered for every single one of these runners. And the reactions were often very similar. First, denial. They didn't think the cheers of "Good job, runner! You can do it!" were for them. When they realized the cheers and clapping was for them, they tried to see who was cheering without being obvious. Then we made eye contact and my cheering continued. "You're doing great, keep going!" And then, the best reaction imaginable. A big, wide smile crossed their face and they waved and said, "thank you!"

I understand what Ed was saying about this experience being addicting. I got to see the faces, one after another, of people truly giving everything they had to run down a goal. And for a moment, they knew what it felt like to have the crowd cheer along as they made their way to their finish.

And one other thing I noticed. At first, I was one of many cheering fans. People were waiting for their own runners, so they were happy to clap and yell and support those coming in. But once their person ran by, they left the course and headed over to meet up with them. And soon, it was a very different situation, with very few people standing and cheering. But, as groups of people walked by on their way back to their vehicles, they responded to my cheering a lonely runner by adding their voices. My yelling called their attention to a late finisher, and they cheered, too, as they went by.

Again, Ed, I get it. I was one voice, but that one voice gave other people permission and encouragement to add their own. Positive reinforcement and public support really is contagious.

I share this experience not to make myself the hero, but to thank Ed for inspiring me to do this. I walked away from today's event feeling like I had experienced a whole new type of race. For a few of them, at least, I know I made a difference.

And there are certainly worse ways to spend a couple of hours.

Edited to Add:
Know this, folks. I'm not ashamed to admit that I shed more than a few tears last Sunday. Partly because the emotions on display were so raw and authentic, partly because I recognized the fear and anxiety on the faces as my own expression from just two years ago... when the thought of running a mile was overwhelming and scary.

("Look at the fat guy running. Sheesh!"
~ The voices I imagined I would hear if I dared to run.)

So, if you see me next time cheering on the last finishers, and I'm wiping my face, it's just drops of "I am so proud of these runners" in my eyes.