Having already decided to sit out the Fearless 5K and instead, spend the evening with my cousin and other friends, I let the night take me where it would on Friday after the concert. And, oh my, the places it took me.

We all cabbed back home and thought about calling it a night. Then my friend Andrea and I decided we should pop in to the neighborhood bar across the street and around the corner from my house. So we did.

Cricket's is a bar that changes completely from day to night. In the afternoon and early evenings, it is a blue collar beer joint. But Friday and Saturday nights, it becomes an urban nightclub. The tunes get soulful, the bar gets packed, and the good times roll 'til they shut the doors at 2am.

Into this mix comes John and Andrea, the two whitest people on the planet. We walked in and, for a moment, the music stopped and every head turned our way. (Ok, maybe the music didn't actually stop, but it felt like it did.) Andrea and I walked right on in like we owned the place, ordered drinks, and found a spot at the bar. And then... yep... we noticed it was karaoke night. How could I say no?

Fast forward to twenty minutes later. In a bar where we were the only white people, I thought it a good idea to sing Sweet Home Alabama. And you know what? Everyone loved it. I had fun singing, the crowd was dancing, and the host wanted me to sing a second song.

Fortunately, I had enough sense to know that my success was quite likely a one-hit wonder sort of thing, and I declined the offer of an encore.

Sometimes, all a guy needs to do to shake up his day is Action 324 - Walk On The Wild Side.

Ooh, maybe that's what I need to do. Instead of Lynyrd Skynyrd, maybe I need to sing a little Lou Reed? 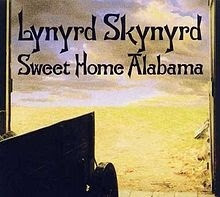