I have been talking about it for a while, but now, it's a done deal.

Okay, so maybe I wasn't climbing mountains today. But I was running up hills. And it was a challenge. Here's a great description, courtesy of FitnessFitale.

The La Jolla Half Marathon is the most hilly half marathon course in San Diego. If you Google “most difficult half marathon in San Diego,” the La Jolla half magically appears as the first search result. Above is an image of the elevation of the course. It begins at the Del Mar racetrack/fairgrounds and ends in La Jolla Cove. There is an 80 foot hill at mile 1.5, a 190 foot hill beginning at mile 3, a massive 420 foot hill (Torrey Pines hill – which is actually a hill that people hike up normally) at mile 6 (which doesn’t end until mile 7.5), and finally, a 150 foot hill to give you a swift kick in the ear at mile 12.5. At least the finish is downhill!

I struggled up the third hill. About half way up, I realized that I could walk up the incline and move nearly as quickly while expending far less energy, so I did. And I was still passing people. 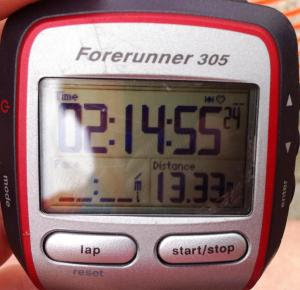 I'm absolutely thrilled with that time and performance.

I have no desire to run La Jolla Half Marathon again, but I am definitely glad to know that I have done it once.

Next up in the Triple Crown Series? America's Finest City Half Marathon in August. And I'll be ready.