I'm in Austin, Texas, this weekend for my cousin's wedding. It's the usual pre-wedding chaos, but overall things are going great. Pictures to follow...

Congrats, Stacey and Jon.
No comments:

What is wrong with people?

I spent most of last week fighting a cold, so I did little more than sit around on the couch or take long naps. By Saturday evening, I was feeling more than a little stir-crazy. So Ric, Grant and I decided to go out for a couple of beers. I wasn't feeling up for a smoky patio, though, so we opted to not go to Pec's and instead went to The Loft.

As soon as we walked in, Grant and I went to order drinks and Ric sat down at the end of the bar where he found a couple of empty barstools. As soon as he sat down, he realized the guy next to him was completely drunk. One moment he was alert and awake, and the next moment he was passed out cold.

As if that wasn't bad enough, there were several people standing near this guy, and they decided that it would be fun to start messing around with him. It was stupid stuff, poking him and screwing around with his barstool or the buttons on his shirt. Keep in mind, at this point, Ric's arm around the back of this guy is the only thing keeping him from falling completely to the floor. Finally, Ric had enough of the other people and let them know that it was in their interest to back the hell up.

Meanwhile, I have retrieved this guy's cell phone from his pocket and am trying to reach someone who can come take care of him. He was alone in the bar, with no friends and no signs of consciousness. I start calling people from his "recently called" list, and I finally found two different friends who agreed to come get him.

All and all, it took nearly 40 minutes to try and help this guy. All the while, two things kept running through my mind. One, what kind of a fool goes out and drinks himself into a stupor when he is all by himself? Anything could have happened to him, and he would have had no clue what was going on. Two, and this one pisses me off even more, what kind of asshole sees someone that completely gone and thinks, "oh, let's mess around with this guy"?

I don't mean he was a little drunk and deserved to be teased. I mean he was so drunk that Ric kept checking his breathing to see if the guy was still alive. When you see someone in that condition, you either think to help him or to hurt him. I can't believe the other people in that bar chose to hurt him.

Anyway, it was late when we went out, and then we burned close to an hour taking care of this stranger. Is it too much to ask to just go out, have a beer or two, and enjoy a good time?
No comments:

Off the Charts Cute...

Could they be any cuter? I don't know how.

Earlier, I posted an entry about my newest discovery, Neutral Underground. Well, that was then and this is now, and things have really changed. I have been asked to serve as an Administrator for the site, and I said yes. It's a great site that I have really been enjoying, so acting as Admin, while unexpected, is something that I am confident I can do well.

Here is a quick description of the site:
Neutral Underground - A political discussion forum for progressives and conservatives.

Highlights: There are a number of special purpose discussion forums for civil political discussion, general news and topical discussion, late breaking news, a members articles forum and a Fight Club forum for knock down drag out discussion between members. There are also non-political forums, covering religion and spirituality, hobbies and activities. We have a Lounge forum so active it's the envy of many other sites.

The forum management is dedicated to a very hands off management style and lean heavily on self policing by the members. They use "Community Guides" and a small anonymous mod staff to keep things running smoothly.

I encourage anyone reading Falling Into Forty to check out Neutral Underground. You will find a lot of the same types of reading there that you find on my blog - politics, personal growth, activities and fun. Stop on by, register, and list San Diego John as your referral.

Hope to see you soon!

We bought the puppies sweaters today, because they are still young and it's been fairly cool around here. Of course, they no sooner had them on then they were back in the yard rasslin' around.

Oh, give me a break. They have only been here a week or so. How am I not supposed to be watching their every move, taking picture after picture? Sheesh.

Here they are this morning, taking a break from a very exhausting morning of... well... playing, eating, and resting. 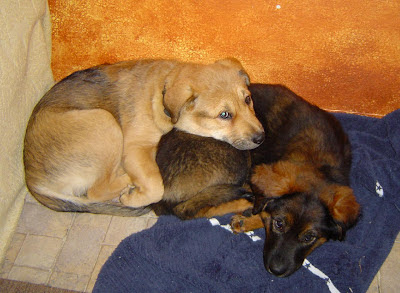 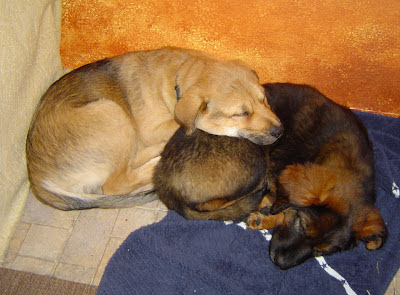 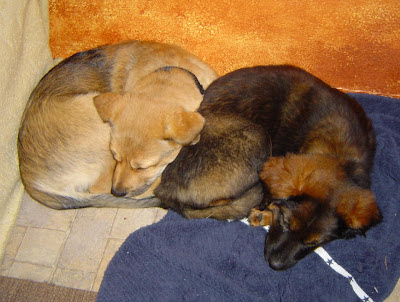