I've heard that from a few people lately. And I know they are right. I'm not the same. There's a sadness about me that is completely foreign to the person I used to be. But I don't think it's possible to go through all that I have over the last couple of years and not be changed by it.

Most people may know some of what happened, but few people know all of it.


So much loss over a relatively short amount of time. And it's broken something inside of me. Instead of becoming numb, I've become hypersensitive. I think about death and loss all of the time, constantly worrying about losing someone else. I know it's unrealistic, but it's what I'm feeling.

What can I do? Well, I've seen a counselor a few times, and I think I need to continue doing that. He can help me work on creating different thought patterns, focusing on the positives instead of imagining all the possible negatives.

Beyond that, I don't know what else to do. Trying to work through the stages of grief was impossible, because we had so much loss piled on top of loss. It's hard to move on when a new wave of pain hits you and takes you right back to the worst feelings again.

I don't know that I will ever be the same person again. I don't know how to turn off the worry, which means there is always an underlying fear of more loss. I realize death is part of life, but I need to strike a better balance that still allows me to live my life.

The simple truth is, I'm not the same happy-go-lucky person I used to be. I don't know if I ever will be that person again.

Reading back over this, it feels like I should have so much more to say. But the truth is, this simple reality is a big part of what is consuming me day to day. I worry over what else might happen and I worry that I won't be able to handle anything more.

And now you know.

No, They Don't Want A Parade.

Speaking for every active duty service man and woman, I can tell you one thing for certain. They do NOT want a military parade.

How do I know this? Because I know what that kind of public display means in terms of work, and I know that no soldier, sailor, airman or Marine wants to do it.

Think about it. A parade means that all those involved need to prepare a dress uniform, clean and prepare any gear or hardware required, and then march for miles in formation. What about that sounds relaxing?

There will be other discussions about why publicly flexing our military muscle will more likely make us look like a banana republic. People are already saying things like that. And no surprise, I agree. It's just dumb. And expensive. And wasteful.

But my small but specific point here is that a parade only means more work for our military men and women. If we truly want to salute our military, raise their pay. Short of something significant like that, just give them a 96-hour liberty pass and say, "thanks for what you do to keep us safe." 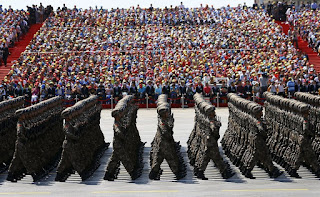 So, Where's John Been?

I've been at work, mostly, and not feeling at all creative. I haven't written anything in months, and the weight of that is like a stone around my neck.

Writing. It's how people get through tough times. And I think I have allowed myself all the "hide out from the world" time that I need. Now, it's time to turn my attention back to my creative self.

It's time to write again.
No comments: