Action 382 - Honor Heroes (Mile 19). I will run mile nineteen in honor of 1st Lt. Travis Manion. His brave service and ultimate sacrifice saved the lives of other Marines under his command and turned the tide of of a must-win battle. I will run this mile in honor of this fallen Spartan warrior.

During his final patrol mission on Sunday, April 29, 2007, Travis was killed by enemy sniper fire while fighting courageously to defend against an enemy ambush. At his memorial service in Fallujah, an Iraqi Colonel spoke and shared that Travis was his brother, “a brave warrior who never feared the death.” Travis’ mark remains in Iraq and in the hearts of all who honor freedom and service. As a testament to his strong character and leadership, the Iraqis named their operating base Combat Outpost (COB) Manion, one of only a few Iraqi facilities named for an American service member. Travis was awarded the Silver Star and the Bronze Star w/ Valor for his actions in Iraq. 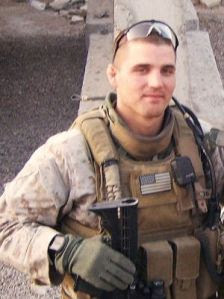 I run this mile, too, in memory of the founder of the Travis Manion Foundation, Janet Manion, who passed on April 24th, 2012, after a valiant battle with cancer. She is again reunited with with her son.