Action 410 - Honor Heroes (Mile 21). I will run mile twenty-one in honor of Staff Sgt. Joshua Cullins. A Marine Reservist called to Active Duty Service, SSgt Cullins was also a Los Angeles Police Department Officer. He had been injured in a roadside blast months before but had insisted on being returned to service as soon as he had healed. His death is a great loss to both the Marine Corps and the City of Los Angeles.

I will run this mile in honor of this fallen EOD warrior, dedicated son and brother. Semper Fi, Staff Sergeant. 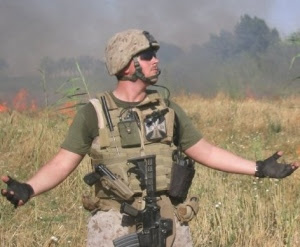