This morning, I ran the La Jolla Half Marathon. I finished a difficult course with a respectable time, and I'm proud of my performance today. 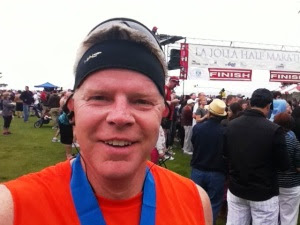 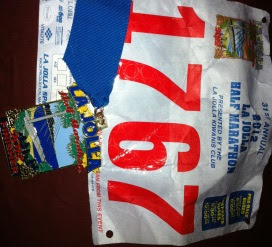 Today was special for another reason, though.

Yep, today was my 10th half marathon. I've now been running for about sixteen months, and it's still a bit surreal to think about where I am today compared to where I was when I started.

My first half marathon was in March 2011. I ran the Safari Park Half and I was so worried that I wouldn't be able to maintain the pace required. I just knew I would be swept. I was being paranoid. I ran a solid 2:09 and had an amazing first run.

Since then, I have run the San Diego Rock and Roll Half, the New Year's Double Half Marathons, Los Angeles 13.1, Carlsbad Half, Palm Springs Half, San Diego Half, Hollywood Half, and now, La Jolla Half. Ten half marathons in all, and I am proud of each and every one of them.

Thank you to the amazing friends who joined me along the way. Because of you, I had the nerve to step up, sign up, show up, and not give up. It's been 134 miles of sweat and, if I'm being honest, complete and total awesomeness!

And this ride continues next Sunday when I take on the OC Half Marathon. Time to start running down the next ten!