Action 331 - Honor Heroes (Mile 14). I will run mile fourteen in honor of Major Megan McClung. An avid athlete and runner, she believed that the Marine Corps Marathon was a "must run" for every Marine, and she herself started the first international Marine Corps Marathon while deployed overseas. Her legacy lives on in another way, as well.

An award started by Iraqi War casualty PAO Major Megan McClung will be awarded to the last place finisher at the Marine Corps Marathon October 28. The "Paul the Penguin Award" which honors the effort and determination demanded of every marathon finisher began in 2006 when the Major began it at the Marine Corps Marathon satellite race at the Al Asad air base in the al-Anbar province of Iraq. Now, her parents continue the ritual.

I will run this mile in honor of this fallen warrior, marathoner and role model. Semper Fi, Major. 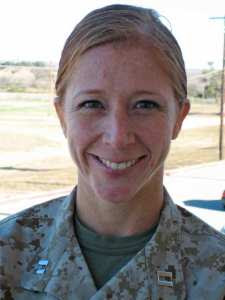 (Photo and summary courtesy of latimes.com.)