Action 393 - Honor Heroes (Mile 20). I will run mile twenty in honor of Cpl Seamus Davey. A warrior to his last breath, his sacrifice saved the lives of his fellow Marines. His bravery and service were recognized with the awarding of the Bronze Star.

for service as set forth in the following

For heroic achievement in connection with combat operations against the enemy as a Reconnaissance Scout, Team 2, 7th Platoon, 2d Force Reconnaissance Company, Regimental Combat Team 2, 2d Marine Division, II Marine Expeditionary Force (Forward) in support of Operation IRAQI FREEDOM 04-06. On 21 October 2005, in Abu Hyatt , Iraq , Corporal Davey's team was tasked with conducting point raids and the cordon and search of over 70 buildings that were known to be a staging area for foreign fighters and insurgents. Upon entering a house, his team was ambushed by four enemy gunmen at ranges of less than ten feet. Corporal Davey was struck by multiple rounds and collapsed to the ground. Ignoring his wounds, and without regard for his safety, he continued to engage the enemy. Corporal Davey's suppressive fire drew the enemy's attention from his fellow Marines, thereby allowing them to safely withdraw from the room. Corporal Davey continued to engage the enemy until he was mortally wounded. By his zealous initiative, courageous actions, and exceptional dedication to duty, Corporal Davey reflected great credit upon himself and upheld the highest traditions of the Marine Corps and the United States Naval Service.

The Combat Distinguishing Device is authorized.
For the President,

I will run this mile in honor of this fallen warrior and fellow San Diego resident. He is missed by all who knew and loved him. Semper Fi, Corporal. 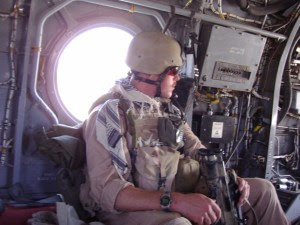