Sometimes, I can over-think. I have an idea or a plan that is enough as it is, but I begin to churn on it and I spend way too much time thinking about it. Some things, though, do not benefit from so much introspection.

I went out for drinks last night with friends, and I really felt like sleeping in this morning. But I got up early instead and puttered around the house for a bit. Then I had a thought.

I should go run before breakfast. I can be back in thirty minutes and I'll feel better all day.

I went back to my bedroom, changed into running gear, and took off out the door. Just like that, I was out on the street running.

Had I thought about it, I would have likely come up with a dozen reasons why I should go run. I had company at the house, breakfast was almost ready, I was tired from last night, blah blah blah. But I didn't think too much about it. I just ran.

Looking back on it, I guess I just started running before my mind had a chance to figure out what was going on. And in this case, that was a good thing. 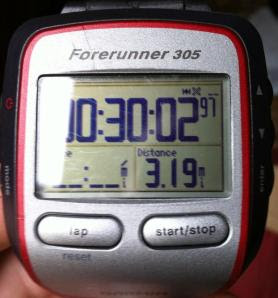