A friend of mine is currently dealing with a complete and total idiot. This friend, Jane, reached out to vent about someone who is being completely unreasonable (Jack). I know the friend and I know the other person, and my first reaction was to be pissed off at Jack. But the more I think about it, the less angry I get.

Action 386 - Feel Pity. It's true. I can't get over the fact that Jack is just a miserable, sad little man who won't accept responsibility for his words and actions, blames the world for everything bad that happens to him, and is unable to develop and maintain mature, adult relationships.

It sounds like I'm venting, and that isn't my intent. I'm just surprised that I'm not really angry at this person, despite his attacks on my friend. I'm sorry for him and a little sad at the realization that he is beyond any kind of rational conversation.

They say that the opposite of love isn't hate, it's indifference. And I see now that is how I am feeling about Jack. After years of watching him yank my friend around, and a couple of years trying to maintain a friendship of my own with him, I get it now. He isn't worth any kind of affection... nor is he worth any kind of anger. He just really isn't worth anything to me.

I feel pity for the person he could be but just isn't. Beyond that, I won't really be thinking about him at all going forward. And I really hope my friend, Jane, can find her way to that same point soon. 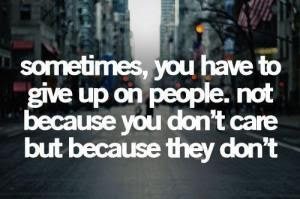 And that right there is my spiritual lesson. I understand this is really my friend's issue to deal with and isn't about me directly. But I can still learn from it. And I choose to walk away and leave him in his sad little place.