Uh-oh. Today's lesson? Do your homework.

I just posted a challenge to myself and to another Marine, another example of me finding any way possible to raise more money for the Injured Marine Semper Fi Fund. I saw a link to this Marine's fundraising page on my own, since we both registered to raise money for the same charity. I also saw that he was $1,000 ahead of me and on his way to his own goal of $3,000.

What I didn't see was exactly who this Marine is. In my mind, he was just another Devil Dog trying to do a good deed for others in need. And I still believe that to be true. But I didn't see that he is not just another Marine. He is a Lt. Colonel, a decorated and seasoned Marine with more accomplishments in his mini-bio than I have yet to imagine for my whole life. And currently, he is the Marine Attache at US Embassy, London.

Here's a little bit more about him from The Carr Center For Human Rights:

LtCol Don Thieme (US Marine Corps) is a career Infantry and Reconnaissance Officer.  He has served extensively in Asia, the Middle East and Europe in billets from Platoon and Company Commander to Regimental Executive Officer and War Plans Chief for all Marine Forces Central and Pacific Command.  He was an Olmsted Scholar at the Jagiellonian University (Poland), and completed both the School of Advanced Warfighting and MIT Seminar XXI programs. He has written, published and lectured at Tufts, United States Military Academy and other venues on military ethics, the lessons of the Holocaust, ethnic relations and broad variety of tactical and operational level issues.

Action 390 - Bite Off More Than I Can Chew. And boy, I did. I already donated $5 to his fundraising and I included a link to my own blog challenging him.

But I'm not backing down. I still believe in doing whatever it takes to promote this cause, even if my doing this challenge is a bit like this penguin rattling the polar bear. 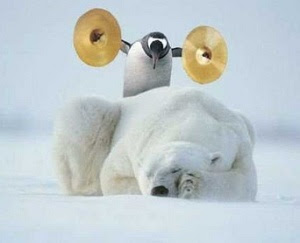 Alright, my friends. I'm looking at you to help me here. You can donate directly at my fundraising page. The marathon is May 20th, so turn to!