Action 320 - Honor Heroes (Mile 13). I will run mile thirteen in honor of Capt John McKenna. He was killed by a sniper in Iraq, in a gallant sacrifice attempt to rescue another fallen Marine.

The same sniper had just shot another New York Marine, 28-year-old Lance Cpl. Michael Glover of Queens. Glover had been the point man in a patrol down a street in Fallujah. He had just reached an intersection when he was hit.

The citation for the Silver Star subsequently awarded to the 30-year-old McKenna reports: "Ignoring the imminent peril from the heavy incoming fire, Captain McKenna ran into the intersection in an effort to save his downed Marine. Completely exposed to the enemy fire, he calmly knelt next to the stricken Marine to assess his condition. As he began to drag the Marine to a covered position, Captain McKenna was hit by enemy fire and mortally wounded."

The citation goes on, "Captain McKenna gallantly gave his life in an attempt to save one of his Marines. His actions inspired his men to drive the enemy from the battlefield, and served as a true example of the selfless bravery to which all Marine leaders aspire." 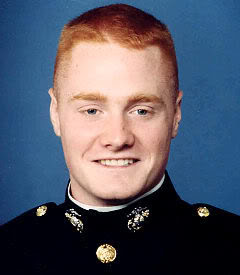