Have you ever wondered how sporting events like marathons or triathlons happen? No, I don't mean who plans or organizes them. I mean, do you know the single most important part that makes or breaks an event? Volunteers. They are the heart and soul. And for one day, I had the opportunity to see an event through their eyes.

The Ragnar Relay series rolled through Southern California last week. Runners left Huntington Beach on Friday, April 20th and ran through the night to Coronado Beach the following afternoon. I signed up for two volunteer shifts, so I was able to work at an Exchange Point and at the Finish Area.

First up was the 4:45am - 10:30am shift. My original plan was to get to sleep early the night before, but that really didn't work out so well. By the time 1am rolled around, I realized that sleeping at the house wasn't really going to work. So I loaded up the car and drove over to the Exchange area. And that's when I saw the signs that read, "No Parking Between 2am and 4am."

Drat. It was nearly 2am and I didn't want to drive back home, so I pulled into the Hilton parking lot and slept a couple of hours. Then, at 4am, I started driving up and down the road, looking for any sign of an exchange. Finally, I saw it. It was off in the distance, but I know an Exchange when I see one. 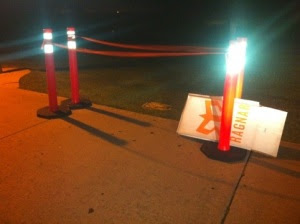 It was just a couple of trash boxes, some orange traffic cones and a bit of tape, but it was an Exchange starter kit. I pulled my car right up in front of it and left my headlights on, thinking that it might make it easier for the other volunteers to find the site if I lit it up a bit. No, not so much. It didn't really help. And I still had a while before anyone else showed up. By 6am, though, the coordinator and the other volunteers were all present and accounted for.

We talked over the different assignments, set up the exchange, donned our safety vests, and were officially open for business. And then we waited.

And waited some more.

Turns out, the heat the day before had taken a toll on the teams. The heat index for the mid-afternoon made the temperatures feel like 110 degrees, and the runners were all slower than expected. 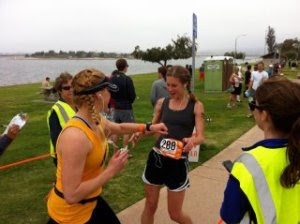 Still, our merry group of volunteers was ready to see the Ragnar teams arrive.

And they did, slowly but surely.

We called out numbers cheered on runners, offered up our own water to teams without, and generally tried to share the Ragnar spirit. By 10:15, when our replacements arrived, we had seen fewer than twenty-five teams. It was going to be a very busy afternoon at Exchange 32.

But not for me. I bid the folks farewell and headed off to my second assignment at Coronado. (I stopped at home enroute, though, because I knew there would be breakfast made for our weekend guests. Blueberry pancakes for the win!)

After a fuel stop, I made my way down to Coronado Island. It was a bit overcast there, but I knew that would be a welcome relief to the already-heat exhausted runners.

My first assignment was at the water tent near the finish line, but I was soon asked to help out with the loading of the Ragnar truck. It was a busy few hours of lifting, sorting, stacking, carrying and hoisting. But that's the reality of volunteering for an event like this. There is heavy lifting to be done and the volunteers are the ones who get it done.

Here's the truck with just a bit of what gets packed into it: 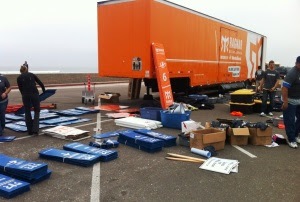 And here are just a few of the traffic cones and bases that had to be offloaded from the vans and staged for the next truck: 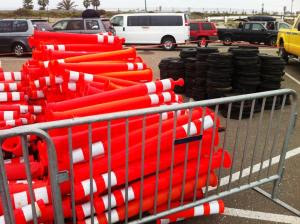 It wasn't easy work, but I learned my lesson. Volunteers put in long hours and make it possible for runners like me to come out, enjoy an event, and walk away without a thought to the work it took to happen.

Thank you, Volunteers. I will not take you for granted again, believe it.