Action 376 - Honor Heroes (Mile 18). I will run mile eighteen in honor of Staff Sgt. Joseph "Joe" Henry Fankhauser . A career Marine, he had already served four tours in Iraq and was awarded a Purple Heart after being wounded in Fallujah. He was about three weeks into his second tour in Afghanistan.

I will run this mile in honor of this fallen EOD warrior, dedicated husband and son. Semper Fi, Staff Sergeant. 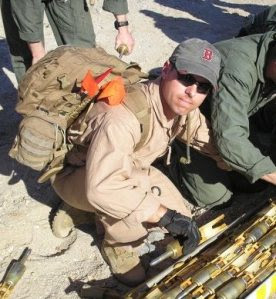 (Photo from Heather Fankhauser via Facebook; summary courtesy of militarytimes.com.)