I'm an early riser. Mornings are my thing. So it works great for me that most distance events start at 6 or 7am. I have no problem getting up before dawn and hitting the ground running, so to speak.

Unfortunately, my husband is not a morning person. Not even a little bit. And after a week of early mornings at his office, all he wants to do on Saturday and Sunday is sleep in. He has no interest in getting up early, standing around an hour or so before an event even starts, then waiting another couple of hours just so he MAY get a glimpse at me as I run by  in a crowd of other runners. He didn't even get close enough to see me run the Marine Corps Marathon, the crowd was so chaotic and busy.

I'll admit, it bothered me at first. I really wanted him to be at the finish line, to celebrate my accomplishment and see me cross the line. But truth is, as crowded as these large events are, he can rarely get anywhere near the actual finish line. So he waits for two hours just to watch me dash by, then spends the next hour trying to track me down in the sea of finishers and supporters. I get why he doesn't want to be there.

Sure, it would be nice to see him at the finish line. But he has many reasons for not wanting to be there. But tonight was a great reminder that there is more going on.

Tomorrow, one of the producers of the upcoming Ragnar movie will be coming down to San Diego to film more interview footage. She has tentatively planned to film part of it here at the house and part of it at Balboa Park where I often run. My husband found out about the filming here at the house and immediately decided that our back yard needed a lot of work before it was presentable.

He came home from work today at 5pm and spent the next five hours - yep, five full hours - chopping out dead plants and trimming back bushes and clipping and snipping and otherwise working like a crazy person. 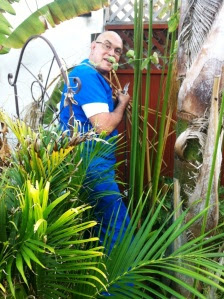 He wants me to feel proud of the house and the yard when the producer is here, and he was willing to spend whatever amount of time it took to make that possible.

Support comes in many forms, indeed. Tonight, he gave up his entire night just to make sure that I am happy with the filming tomorrow. And as hard as he worked tonight, he can absolutely sleep in instead of coming to see me run the upcoming La Jolla and the Orange County Half Marathons. He's more than earned that sleep.