An unexpected benefit of this physical fitness journey of mine has been a chance to revisit places in my past and create brand new memories there. Some of these moments were expected, like when I ran the New Years Weekend Back-to-Back Half Marathons and that became my new memory of Dallas, Texas. But other moments catch me completely by surprise.

Action 293 - Play The Bowl. Today's half marathon course took us from Universal Studios down along Hollywood Blvd and back. I knew that was coming. But I didn't pay much attention to the course map, because I had no idea we ran right in front of the Hollywood Bowl.

My memories of the Bowl are good. Very good, in fact. I remember going there as a teenager to see the Go-Go's in concert. It was an incredible night for a young kid. Heck, just going to Hollywood was a big deal. But sharing that experience with my best friend, Brenda, was something I will remember for the rest of my life.

Obviously that's true, because when I ran around the corner and realized I was running right in front of the Hollywood Bowl, a big goofy smile covered my face. In a flash, I remembered where we parked, where we sat, the entire concert... even the wild guy selling counterfeit concert shirts in the parking lot that ran by our car escaping from security. It all came flooding back to me as I ran by.

There have been many benefits along this fitness journey, and today I experienced another one. Because I was up in Hollywood running a half marathon, I went by a landmark that sparked a good memory and great emotions. 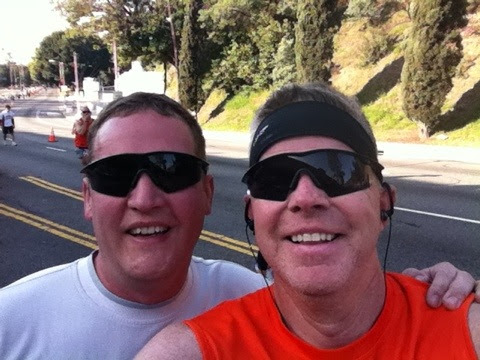