It's Friday afternoon before Easter Weekend, and the highways are a mess. Traffic is backed up and estimates are that it will take twice as long as normal to go any distance at all.

Unfortunately, Jerry and I have to get through LA traffic and to the Universal Hollywood HIlton Hotel before 7pm to pick up our race packets. With limited time and a lot of miles to cover, lunch had to be a quick stop along the highway.

Action 287 - Go Loco. And we did. Doritos Locos Tacos, that is. We stopped at Taco Bell and tried the new taco that is made with a Doritos chip outer shell. 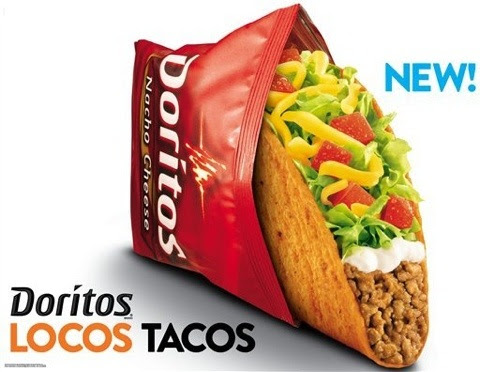 Not going to lie here. It was pretty darn good. I don't even want to know how many calories it has in it, because I already ate it and because I really have wanted to try it for a while now. I don't see myself having another one anytime soon, but it was nice to try it.