For most of my life, I've struggled with a fear of failure. And sometimes, that fear has become so real and tangible that it turned into a self-fulfilling prophecy. I have quit. And I have had to live with the consequences and shame of that failure afterwards.

But I'm working from a new playbook these days. It started when I decided I didn't want to weigh over 200 pounds anymore. I promised myself I would work out and eat perfectly every single day until I weighed 199. And I did that. It continued when I said I was going to run a Super Spartan and a Tough Mudder. I was determined to cross both of those finish lines. And I did. And it continued when I vowed to run and complete the Marine Corps Marathon. I was going to do it for the honor and glory of all those brave Marines who had come before me. And I did that. I set out to do each of these things, despite my fears of failure.

Action 285 - Don't Quit. In the end, it really is that simple. I can either listen to the fear and doubt in my head or I can replace those words with personal messages of encouragement and support. In other words, I can listen to the garbage or I can drown it out with the sound of how awesome I am.

Which choice fuels success? Yeah, it's obvious. All I have to do to avoid dealing with feelings of failure is to not quit. I just need to keep going, see any challenge through, and celebrate the glory that comes with finishing.

Don't quit. Because really, it feels so much better to see it through! 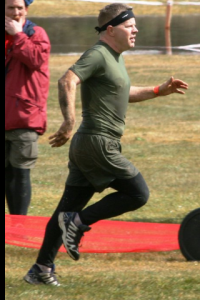