I've read that running doesn't develop character, it reveals it. Hours and hours and miles and miles, it's a long time to be in my own head. So it's no surprise that each long run helps me learn something new about myself. Yesterday's lesson was a bit of a shock, though.

I was on mile five and listening to "Girl From The Gutter" by Kina. One lyric jumped out at me.

Things are lookin' up for me now
It seems like Karma's makin' its rounds
It's my turn now, won't be held down, no
Karma's gonna visit you too
You gotta pay for the things you put me through
I hope you do, I hope you do

I smiled as I thought, yeah, you said I would never run a half marathon, and here I am running my eighth one. As I thought more about it, though, I realized that the song held a completely different meaning for me. The song is written to an ex-lover, showing him that she has turned her life around and accomplished so much. But I was confused about who I was singing to.

Action 159 - Admit That I'm The Villain. As I was singing the song, I realized that the hateful words that have haunted me for so long didn't come from someone else. It wasn't an ex who said I would fail. It was me. I was the villain. I was the one who put all of that horrible stuff in my head.

The voices in my head taking shots at me... the voices were my own. Well, I guess I showed me, huh? 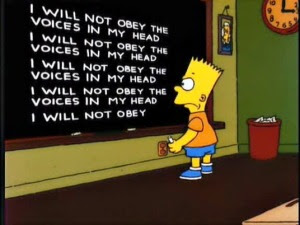 (Image courtesy of The Simpsons.)