I am a person who willingly shares a lot of my life in a public forum. But some things are harder to say than others. This, now, is one of the most difficult things I have ever written.

Several weeks ago, I came across a website devoted to survivors of sexual assault and abuse. It's called Project Unbreakable. The site is a series of photos of survivors holding up signs, and the words on each sign are the words they still associate with their assaults. 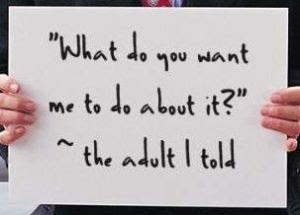 I was eleven years old. My attacker was a family friend my parents' age. We were staying overnight in their home and my mother was gone for the weekend.

His wife and children and my older brother were already asleep in other rooms and he and I were still awake watching television. He moved close to me and put his arm around me, pulling me closer still. He said things like, "this is nice, staying up late and watching TV, isn't it?"

It wasn't nice. It made me uncomfortable. But at eleven years of age, it wasn't easy to find the words to explain, let alone to say them out loud to an older person who is practically a family member himself.

He became more aggressive, pulling my hand down into his crotch and grabbing my own. "It's okay," he said. "It feels good. See what you're doing to me."

He actually said those words to me, as if his arousal was my fault. And at that age, I didn't understand that I wasn't the one to blame. I felt embarrassed and ashamed, my mind racing to figure out what I had said or done to make it all happen.

He pressed on. He was using my hand to rub against himself through the fabric of his shorts. Then he was pulling me over onto his lap while trying to yank his own shorts down. I was so afraid I could barely breathe, let alone do anything to stop what was happening. He was an adult, big and strong, and I was completely terrified.

He was fumbling with his shorts, trying to undress himself without letting go of me. He lost his grip on me and I slid from his lap and towards the floor, and that was the break that snapped me into action. It was happening in a blur, but I knew I needed to move.

I remember jumping to my feet and running into the dining room. I ran around to the backside of the table, putting it between him and me.

He came in right away and started to talk to me. "It's okay, John. Why are you standing back over there?" To this day, I remember the tone of his voice being almost one of surprise, as if he couldn't fathom the reality that he was trying to attack me and I was doing anything to escape.

He kept talking and walking slowly around the table, and I kept moving around it, staying on the opposite side as far away from him as I could. After several minutes of threats ("I'll whip your ass if I have to come get you."), coercion ("You want me to tell your Mom that you were being a brat?"), and denial ("I don't know why you are acting like this."), he finally gave up and went to his bedroom.

I remember sitting at the table for a very long time. I was afraid that if I went to my own room, he would come and find me there. So I sat with my back against the wall, looking through the living room and staring down the long hallway to make sure that he didn't come back. I stayed there until the sunlight came through the dining room window.

I finally ran down the hall to where my brother was sleeping. I shook him awake and said, "we have to go." Barely awake, he was having trouble understanding why I was so upset. I got the words out, ugly as they passed my lips, and I felt ashamed as I told him everything.

His first call was to an adult we trusted, someone we thought would know what to do. He called and they came right over. I explained everything that happened, and the first words out of their mouth were, "what do you want me to do about it?"

I was stunned. I was shocked. And I felt sick to my stomach. What did I want? I wanted to hear, "it wasn't your fault." I needed to hear, "we're leaving right now." I was desperate for, "you're safe now and I'll protect you."

I sat there in silence for a long moment, then I replied, "nothing." And I got up, walked down the hall back to the phone, and I called my Grandparents. When my Grandmother answered, I said, "I need Grandpa to come get me," and then I broke down in tears.

My Grandmother immediately said, "he's on his way, now you stay on the phone with me until he gets there, okay?"

And that was the end of that. I left and never looked back. And for the next ten years, I was estranged from the adult I turned to for help. I couldn't get over the feeling of betrayal.

Finally, when I was twenty-two, we had our long overdue conversation. I explained why we had grown so far apart, reminding this person that the one time I needed them, they had failed me. And it was finally in that moment that I was able to forgive them for those words.

I am still not willing to forgive the man who molested me. I won't ever forgive him, nor do I feel I need to in order to move on with my life. He has long since passed away and is of no concern to me or anyone else, anymore.

I share my story now for three reasons. One, because I have alluded to it in passing to different friends over the years but I have never explained it in detail. And I feel like holding it all inside makes it seem like it's something I should be ashamed of. But it isn't my secret. It isn't my sin. And it isn't a reason for me to feel guilty.

I also share it because I hope it can be a lesson for anyone out there who may one day be on the receiving end of those words from a child and not know how to respond. It's very simple. Make sure the child knows they are safe, they are believed, and they are not to blame.

Finally, I share this story now and in the context of Project One Five because I am truly cleaning house of the garbage and pain of my past. I am determined to live the rest of my life looking forward, and that means no longer carrying this around in my head. This is not my burden to carry. It never should have been.

I am not the bad thing that happened to me. I am not the shame of someone else's behavior. And I am not the inaction of an adult who left a wounded child twisting in the wind.