I described the shiny medal from Ragnar Del Sol as a reward worth having. And it is. It's something physical and tangible, an item to hold in my hand and proudly display as proof of my accomplishment. But at the end of the day, it's just a medal. There are far greater things to celebrate.

Action 088 - Reap The True Rewards. Below is a picture of my team, Kilty Pleasures. And having the opportunity to spend time with them, to get to know them, to now be able to call them friends... well... that really is the true prize I am walking away with. 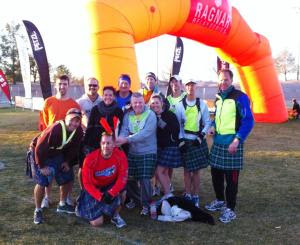 I knew three people from Ragnar SoCal last year - John, Kat and Timm. And even they were going to be in Van #2. So once again, I was getting into a van with five strangers. Jan and Marianne, kind enough to allow me to ride to Phoenix with them. Ryan and Brent, easy-going guys that made me feel instantly part of the team. And James, at least as crazy as me and happy to let the world know it. I was surrounded by five fantastic people who welcomed me from the first moment onto the team.

And Van #2? They were just as incredible. I enjoyed my fleeting moments with them so much that after my van had finished our last set of runs, I decided to ride along with Van #2 as they ran their last, too. And I'm so glad I did. I got to finally get to talk with John, Kat and Timm. And I got to know Chris, Bobbie and Jerry. All six people in that van made sure I knew how glad they were that I was riding along with them for the final legs and that my being there helped keep them motivated and pumped up for their runs.

And the party after? John and Kat opened their home to all of us runners, plus we were joined by the extended circle of friends, including Rachel, Karrie and Pebble. And to a person, I was so completely overwhelmed by how immediately comfortable and connected I felt. And don't get me started on the ride home to San Diego with Timm and the music connections we have. I have never been around someone who has as eclectic a collection of music as I do. And his explanation of "I just started saying yes" was fantastic inspiration to me.

It's funny, but all of this happened because I made the same connections last year at Ragnar SoCal. My van was full of amazing people that I am still connecting with and getting to know today. And nearly a year later, the rewards of that weekend event are still revealing themselves to me. I can only imagine that the rewards of this weekend will unfold for many, many months to come.

And Ragnar Del Sol's Team Kilty Pleasures? You all are truly amazing, and I can't put into words how much this relay meant to me. With all the crazy that is happening in my life right now, I really needed a chance to get away and experience something completely positive. You all gave that to me, and I will always be grateful to you for that.