That example I gave earlier, about checking the capacity of the Rose Bowl? Yeah, the rest of the story is even sillier. I'm running the Pasadena Marathon, and it starts and ends outside the Rose Bowl. I was already wondering where I would park (seriously, what is wrong with me?), and I thought, "pfft, it's the Rose Bowl, there will be plenty of parking there at the stadium."

Well, that also got me wondering. How many people are going to be running Pasadena and how big is the stadium? I wanted to know because the Marine Corps Marathon was a madhouse, both running and the crowd at the end. I knew Pasadena would be smaller, but not sure how much smaller. So I hopped on to the iPad and found out that there will be 1500 marathon runners and the stadium holds roughly 100K people.

In hindsight, I like knowing how many runners there will be. But knowing the capacity of the Rose Bowl? It doesn't matter if it holds 30K people or 500K people, either way, the place is big enough to accommodate runners and fans for a 1500 person event.

Thus, Action 037 - Learn To Not Care. Some things I don't need to know immediately, and others, I don't need to know at all. Who cares how big the stadium is? That empirical fact added nothing to my life. And yet, I let it be more important than the half-asleep state I was already in.

Not everything matters. And it's okay to not care about some things. It doesn't make me a bad person. It makes me a realist with a limited amount of energy and time. 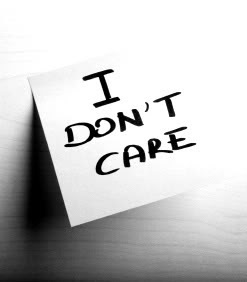