This entire project is based on a simple idea. I am not ready right now to run the Pasadena Marathon, but each of these actions will help me get there. And the more demanding the action, the more likely it will be to shake me out of my rut and get me fired up, right?

Enter Action 029 - Challenge Myself. I found out tonight that there is a Laguna Hills Half Marathon on Memorial Day, May 28, 2012. That is one week after I run Pasadena. That's too soon to be jumping in to another event, right? Not if the event is a fundraiser that honors and supports the United States Marine Corps Darkhorse Battalion.

For those that don't know, Darkhorse 3/5 is an infantry battalion of Marines that have distinguished themselves in some of the most intense and deadly fighting in the Afghan War. Their service is legend and their sacrifices great.

'Darkhorse' Battalion And The Afghan War

Nearly 1,000 U.S. Marine officers and enlisted men deployed to restive Helmand province in southern Afghanistan in September 2010. By the time their tour ended seven months later, the Marines of the 3rd Battalion, 5th Regiment — known as "Darkhorse" — suffered the highest casualty rate of any Marine unit during the past decade of war. NPR tells the story of the 3/5 — both in Afghanistan and back home.

If these Marines can serve so honorably and faithfully, surely I can "sacrifice" one morning to run a half marathon in tribute to them. 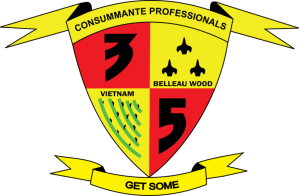