I am dedicating my run in the Pasadena Marathon to Marine Corps heroes who have made the ultimate sacrifice, so that in my own small way, they may be honored, acknowledged, and remembered.

Action 493 - Honor Heroes (Final Distance). I will run the last two-tenths of a mile and cross the finish line in honor of 2nd LT James Blecksmith, born on September 26, 1980, in the city of Pasadena. A member of the famed Third Battalion, Fifth Regiment, Dark Horse 3/5, Blecksmith was killed during Operation Phantom Fury. On Veterans Day, November 11, 2006, two years to the day after Blecksmith's family heard he'd been killed in action in Iraq, the Marines renamed Pasadena's Marine Corps Reserve Center in his memory

I will complete my run and finish the marathon in honor of this hometown hero. Semper Fi, Lieutenant. 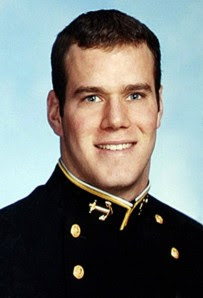