Action 425 - Honor Heroes (Mile 22). I will run mile twenty-two in honor of Sgt. Andy Stevens. Even as a child, Steven was already imagining a military career. His sister told mourners at the funeral that he used to wear camouflage to elementary school and draw pictures of war zones in crayons.

I will run this mile in honor of this fallen Marine warrior, dedicated son and brother. Semper Fi, Sergeant. 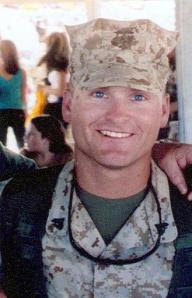