Yikes. Sometimes, when the universe sends a message, it is crystal clear and unmistakable. And this morning was one of those times.

I worked out early, so I stopped by 7-11 on the way to the office to grab coffee and a bite to eat. (I went with a Belvita Breakfast Biscuit. Not great, but not bad. And definitely better than the tube of mini-donuts I oogled on my way to the register.)

There were two women working the counter, and they were both over-the-top friendly and cheerful. They were downright chipper, in fact.

Have a fantastic day!

Enjoy your day out there!

It's going to be a beautiful day!

Honestly, they were great, like little bursts of sunshine. And then came... that guy. One of the clerks asked, "having a good morning?"

It was as if all the air was instantly sucked out of the store. If there had been a record playing, it would have skipped and the needle would have scratched all the way across it. His comment fell on the counter like a stone.

Look, I realize that not everybody is having a great day. I know that some people, in fact, are having completely terrible days. But I hope that when my bad day arrives, I don't behave like this guy did. All he had to say was, "good, thanks," and the moment would have passed.

I don't know what was going on with him. Perhaps today really is the single worst day of his life and he is normally a happier person. Maybe. I'm not really concerned with judging him. I'm more concerned with making sure I don't bring that sort of dark cloud of energy to others when I'm unhappy.

Don't be that guy. That's an action I will keep in mind. 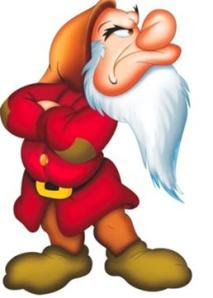