Action 470 - Honor Heroes (Mile 25). I will run mile twenty-five in honor of SSgt. Stephen Dunning. He was killed when a booby trap connected to a device he had just disarmed exploded, his father said. Almost a month before his death, he had been promoted to staff sergeant.

I will run this mile in honor of this fallen Marine warrior, son and brother. Semper Fi, Staff Sergeant. 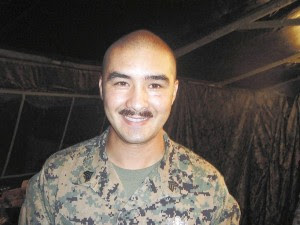