I've been running for over a year now, and my family knows that it's become very important to me. And this weekend, I got a chance to see the effect my running is having on other people. 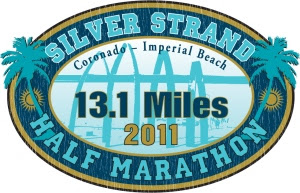 In November, I am running the Silver Strand Half Marathon on Coronado Island. And my cousin, who lives in Washington, had already decided to come down and run it with me. It will be her first half marathon, and I'm excited to run it with her. (Plus, a friend of mine is coming down from Las Vegas, so we planned to be a running party of 3!)

But this weekend, my two other cousins surprised me by saying that they are going to run the event, too. Neither cousin has every run that far, but they have already registered and are ready now to start training. Both of them are responsible for their own decisions to run, but I know that they would not be coming along if I wasn't running. Influencing other people feels great, but influencing family? Love it!

Even though I have to say goodbye to the family tomorrow morning, it's exciting to know that I get to see many of them again in November.