For me, running has been a rather solitary endeavor. I have amazing friends who have joined me along the way for training runs or on race days, but more often than not, I'm on my own. And I'm okay with that.

But there is more to running than just logging miles by myself. And today I got to experience that in living color.

As I've mentioned before, the Run Jester is a gentleman named Ed who loves to run. A lot. Like 100 miles at a time kind of runs. And that's not the neatest thing about him. He also likes to run marathons, stop at mile 26, and wait to cheer on other runners. All the other runners. Literally, every single other runner on the course. The Run Jester stands at the end of the race for hours, until the very last marathoner (or half marathoner) finishes. Then he will run in with them. 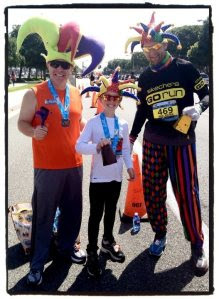 I decided to do that at the La Jolla Half Marathon, and the experience was unbelievable. And today, I joined up with Ed and the mini-Jester, Colby, and helped them cheer in the runners at the OC Marathon.

As expected, it was an absolute highlight of the day. First, it's impossible to be around the Jester and not be affected by his spirit and his passion for the run. And he cheers and encourages every runner - seriously, every runner - with "good job!" and "26 down, only .2 to go!" or "look at you, you got this!"

And that cowbell. Lord, that cowbell. It's loud. It's hear-it-a-city-block-away loud. And he's a hard guy to miss. So every runner knows he is there long before they actually get up to him. But when they do, they have a big smile and a recharged kick in their step.

And so it was today. Ed and Colby were kind enough to let me join them, and we (along with Shawna, Chris, Tammy, Bill, Patty and Billy... did I miss anyone?) did our best to welcome every runner as they came by. And hours later, when the very last runner came by, we gathered up our stuff and walked in right along with her.

It's powerful stuff, this whole idea of giving back to the running community by paying it forward. It reminds me that running can be more than a solitary outing. It can also be a tight-knit, supportive group of people celebrating the accomplishments of all.

Thanks, Jester Crew. You will definitely see me out there again!