A couple of months ago, I decided enough was enough. We own a large side-by-side fridge/freezer and a stand-alone freezer, both stuffed full, and yet we were always running to the store for whatever meat we needed for dinner. Really?

Ric and I talked and decided that we would start with the small freezer and work our way to the one in the kitchen. We would grab something out and either eat it or toss it out. It's now weeks later, and we are still working on clearing out the second freezer. I'm shocked at how much food we had purchased and frozen, set aside for who knows when?

Ric had to work late this evening, which meant I was on my own for dinner. I decided to play "guess the patty." On one shelf of our freezer, we have several different types of patty-shaped food. Some of them are clearly labeled as angus beef patties, and others are some brand of turkey burgers and, I think, veggie patties.

I reached in, grabbed two patties, and decided they would make an acceptable dinner. Turns out, they were veggie, and not half bad. I served on some mini-buns with a few healthier versions of condiments and, ta-dah!, food was served.

Ric is working late again tomorrow night, too, so maybe I'll do the same thing for dinner. Hey, at least the freezers are getting emptied out. Sure, we'll be making a trip to Costco again soon, but at least we'll know what we're storing. Otherwise, we could end up like this random fridge. 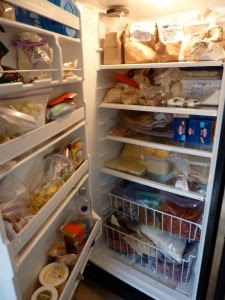 Email ThisBlogThis!Share to TwitterShare to FacebookShare to Pinterest
Labels: Nutritional, Project One Five