If you're a new runner, or you at least remember being a new runner, you have likely said those words above. I know I have. When I first got up off the couch and started exercising, I felt like I would never be able to run a mile. Then it was a mile in ten minutes. Then it was a 5k and a 10k. Then a half marathon and a marathon. And yet, I have done each of those things.

Tomorrow morning I will run my eleventh half marathon. Two weeks later, I will run my second full marathon. And a week after that, my twelfth half marathon. Each of these milestones is still a happy surprise to me, a celebration of where my journey has taken me and more evidence that I was terribly wrong before. But what's next?

Action 435 - Look Ahead, Look Behind. I have recently been introduced to a group of ultra-runners. They do 50Ks, back-to-back marathons, fifty milers, 100 milers and even more. And when I think about what they are doing, I find myself saying very familiar words.

Sure, the numbers are way higher, but it's the same thing. Looking ahead, I am stunned by the distances and sure that they are way beyond my ability. But looking back, I realize that it is no different than before. I need to identify what I want, determine the best way to train for it, and then make it happen.

Honestly, it's that simple. And while I can't say for sure that I will ever run those longer distances, I know one thing for certain. If I don't run them, it will be because I chose not to. It will not be because I was afraid of the distance, the training, or the effort. I can do whatever I am willing to work for.

Besides, these double medals are pretty darn sweet, right? 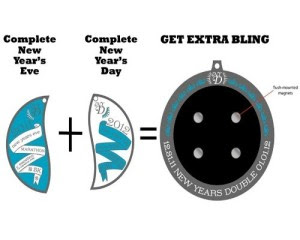