Action 485 - Honor Heroes (Mile 26). I will run mile twenty-six in honor of Cpl Ramona Valdez. On June 1, 2007, the United States Marine Corps honored the memory of Cpl. Valdez by dedicating the II MEF Communications Training Center as the Valdez Training Facility during a building dedication ceremony. The building has a plaque with Valdez's name inscribed.

I will run this mile in honor of this fallen Marine warrior, dedicated wife, sister and daughter. Semper Fi, Corporal. 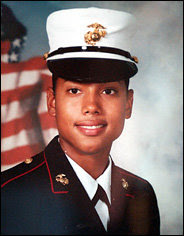