Not sure what's going on with me, but I've been in a foul mood most of the day. There's no real reason. There really isn't anything all that bad going on. It's more like a series of small but annoying things.

I had to go to Costco on the way home, and I really hate that place. Dozens of stupid people hovering like vultures over the free samples, already small aisles crowded with more displays of crap, and employees that return any question with a dazed, half-stoned look of confusion. And that was just part of my day.

I struggled to fit all the groceries into the borrowed car I was driving (mine was loaned out to a friend... long story). I had to make a stop out of my way to drop off someone else's stuff for them. I had to drag all that crap back out of the car and carry it all into the house. I had to make room in the too-small kitchen to put it away. I came home to find my laundry had been pulled out of the dryer and left in a pile on top. And on and on...

Yep. I know. I'm so far away from any actual problems that I'm being an idiot. The food, for example. I'm bitching about a cart overflowing like this one. 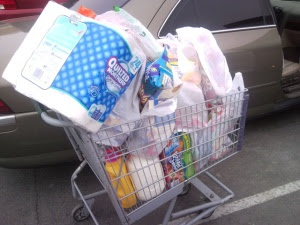 While all over the world, "food problems" looks more like this. 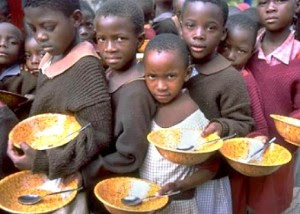 The stop out of my way? I had to drop off some things that a former employee had left behind. Her temp job ended and she is now looking for work. Think she would trade her problems for mine?

And my laundry? My problem is finding room in my closet and drawers to put everything away, while not a mile from my front door, homeless veterans have everything they own in a rucksack on the ground next to them.

My lesson in this action is to remember that most people in this great big world would consider themselves blessed to have problems like mine. And I'm going to be in a crappy mood because my day's one minor inconvenience after another? No, I can't be that guy. I won't be the man who acts like my first world "problems" are big enough to bother me.