Ken Cuccinelli is an idiot, or More Stupidity from Virginia 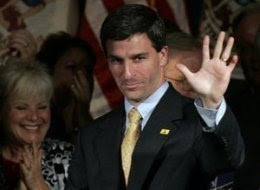 Newly-minted Virginia Attorney General Ken Cuccinelli appeared to endorse the idea that President Obama may not have been born in the United States during an interview posted by blogger "Not Larry Sabato".

Not only did Cuccinelli appear to stand up for birther claims, but the Virginia Attorney General went on to lay the groundwork for a potential court case challenging President Obama's birth certificate.

Here's an excerpt from the interview:

Q: What can we do about Obama and the birth certificate thing?

Cuccinelli: It will get tested in my view when someone -- when he signs a law, and someone is convicted of violating it and one of their defenses will be it's not a law because someone qualified to be President didn't sign it.

Q: Is that something you can do as Attorney General? Can you do that or something?

Cuccinelli: Well only if there is a conflict where we're suing the federal government for a law they've passed. So it's possible.

Q: Because we are talking about the possibility that he was not born in America.

Cuccinelli: Right. But at the same time under Rule 11, Federal Rule 11, we gotta have proof of it.

Q: How can we get proof?

Cuccinelli: Well... that's a good question. Not one I've thought a lot about because it hasn't been part of my campaign. I mean, someone is going to have to come forward with nailed down testimony that he was born in place B, wherever that is. You know, the speculation is Kenya. And that doesn't seem beyond the realm of possibility.

Yes, Ken. It is beyond the realm of the possible. At least for those of us who are not complete fucking idiots.

Email ThisBlogThis!Share to TwitterShare to FacebookShare to Pinterest
Labels: Politics