It's Everybody Draw Mohammad Day.

And I can't explain it any better than Greta Christina has already done:

This is my drawing of Mohammad. 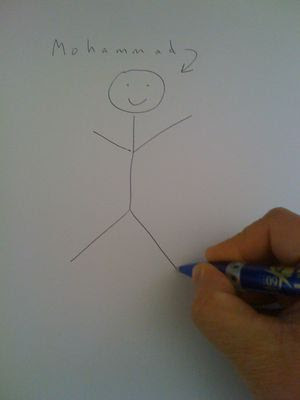 I wish I were a better artist, and could draw something other than a stick figure. But I actually kind of like its purity. If a simple, entirely undistinguished, smiling stick figure with the word "Mohammad" above it can be so offensive as to earn me a possible death sentence... that makes the whole silly idea seem even sillier. And I like the fact that it's a photo of my hand actually making the drawing. Gives it a certain punch, I think.

Today is Everybody Draw Mohammad Day: an event in which people around the world... well, draw Mohammad. We're deliberately violating the Muslim law against creating images of the prophet Mohammad -- a law that some radical Muslim extremists are attempting to enforce with violence and death threats. On everyone. Muslims and non-Muslims alike. 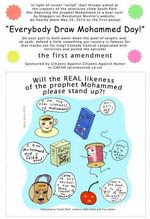 Actually, strike that. It is a law that some radical Muslim extremists are successfully enforcing with violence and death threats. Everybody Draw Mohammad Day was instigated by Seattle cartoonist Molly Norris, after Comedy Central cut a portion of a South Park episode following a death threat from a radical Muslim group. And this is hardly an isolated incident: when the Danish newspaper Jyllands-Posten ran the cartoons of Mohammad that sparked violent protests around the world, many news publications declined to publish the cartoons in question, despite their obvious newsworthiness. Many newspapers still won't publish them. And when this self-censorship happens, the Muslim law against drawing Mohammad has successfully been enforced.

I want to explain why.

That's more or less what I'm doing today. I realize that.

I'm doing it because, in some cases, offending people's sensibilities is, in and of itself, a valid point. And this is one of those instances.

The idea that the rules of a religion ought to apply to people who don't follow that religion? It's flatly absurd. As Hemant Mehta of Friendly Atheist so brilliantly pointed out, "You never hear about Hindus walking into McDonald's and telling the manager they're not allowed to use beef products anymore. If they did, we would laugh it off. We'd say that's absurd because non-Hindus don't have to follow their rules."

But that's exactly what these radical Muslim extremists are doing. Despite the fact that they will happily violate the Hindu rule against eating beef, or the Orthodox Jewish rule against interfaith marriage, or the Yazidi rule against wearing the color blue, they nevertheless feel that it is their right, and indeed their duty, to enforce the Muslim rule against drawing Mohammad -- even on people who aren't Muslim. Using violence, and threats of death.

And it is not possible to effectively protest this by simply saying, "This is wrong." The only way to effectively protest this is by violating the damn rule. If we all wring our hands and say, "Oh, yes, this is terrible, how dare these terrorists use violence and death threats to enforce their religious rules on people who don't share them" -- and still nobody will break the damn rule because we're afraid they'll hurt or kill us -- then their terror tactics will have worked.

I'm drawing Mohammad to send a message to Muslim extremists -- and other religious extremists -- that their terror tactics will not work.

I'm drawing Mohammad to reject out of hand the attempt to make criticism of Islam -- or of any other religion, for that matter -- off-limits, simply out of fear of violence.

I'm drawing Mohammad because many people feel comfortable critiquing, or poking fun of, or indeed commenting on, any other religion... but avoid doing any of this with Islam, for fear of violent retribution. And I refuse to allow myself to be extorted in that way.

And, perhaps most importantly of all, I'm drawing Mohammad to spread the target around... so there are so many people drawing Mohammad, the terrorists can't possibly go after all of us. 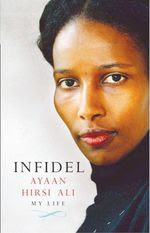 This is a point made by Ayaan Hirsi-Ali -- former Muslim, current atheist, target of a fatwa for her outspoken blasphemous criticism and defiance of Islam. In a piece she wrote about the South Park/ Comedy Central incident -- and about the seriousness of the death threats against the show's creators -- she asked, "So what can be done to help Mr. Parker and Mr. Stone?" And she answered, in part, "Do stories of Muhammad where his image is shown as much as possible. These stories do not have to be negative or insulting, they just need to spread the risk. The aim is to confront hypersensitive Muslims with more targets than they can possibly contend with."

And there is no way to make that point without actually violating this rule.

To them, I say... well, Claudia commenting at Friendly Atheist said it way better than I could, and I'm just going to quote her: "The day drawing a bloody stick figure isn't something you have to do while looking over your shoulder. The day cartoonists don't have to build panic rooms in their homes (!!) for a rough picture of a dog with a mans head. The day dozens of people don't die (again !!) because of some cartoons. On that day, I will agree that the secular group is just being immature and hurtful."

Is it hurtful to deliberately poke people's sore spots with a stick, just for the sake of doing it? Yes. I don't think it's a very nice thing to do, and I don't generally do it.

But is it far, far more hurtful -- not only to certain individuals, but to every individual in the world, and to society as a whole -- to use violence and death threats to frighten people away from criticizing your religion, and to force obedience to your religious views on the entire human race?

By a thousand orders of magnitude, yes.

And in this case, the only way to oppose the latter is to engage in the former.

There's something I want to say here: words that keep brimming up in my head and won't shut up. I'm reluctant to write them down; I cringe a bit at the thought of posting them; they've become such a cliche that it's embarrassing to even think them. I never imagined that I'd say these words as anything other than a joke. I never imagined I would say them with any sort of sincerity or passion.

But if we don't draw Mohammad, the terrorists win.