Twelve minutes after the starting cannon shot, my running buddy and I made our way across the timing mat. We were on the go and starting our marathon.

After standing around for the better part of an hour, we were anxious to move. And we all know how easy it is to over-run at the beginning. Running in a tight pack kept us from going out too fast, though. Our plan was to stay somewhere around 11:00 minutes per mile. That's slower than my 10K pace of 9:30, but we both felt it was a pace we could maintain for the whole marathon.

The first mile was pretty flat. It was cold and shady, but I was all adrenaline at that point. It was so exciting to actually be running after months of preparation that the distance really flew by. But once we reached mile one, we hit the big incline. It was a long, sloping climb and it was my first, "oh, damn," moment. It's when the enormity of what I had signed up to do hit me full on.

Fortunately, everywhere we ran (and I do mean everywhere) there were cheering crowds of spectators lining the streets. Sometimes small groups, other times packed several people deep, but always... always... cheers and encouragement from the most amazing people I've ever seen at an event.

The hill continued until we hit the 2.5 mile mark. There, it was a nice steady downhill until mile 4. The course was beautiful, almost a back country run through intense autumn foliage of reds and browns. I'm from San Diego, so it was an extra benefit to be somewhere in the fall with so much scenery to enjoy.

At this point in the race, I was thinking about great advice someone had given me. They said, "don't get so caught up in the stress and worry that you forget to enjoy the event itself." I kept that in mind, and running through the beautiful countryside kept me more than distracted from the miles I was putting in.

Just after mile 4, we crossed over a bridge. I made sure to keep my head up and look both ways as I ran over it. It was still cold, but the sun was shining and the view was breathtaking. I was the only runner who called out, "hey, everyone, enjoy the view!"

The next five miles were an out and back along Canal Road through the Palisades, an upscale neighborhood adjacent to The Mall. Even though it was completely residential, we still had crowds out to cheer us on. Entire families were along the course, holding signs and waving pom-poms and clanging cowbells. (Seriously, what was with all the cowbells?!)

My best memory of these miles was the Navy sailor, running alone, carrying a flag, and singing "Take On Me" by a-ha. Yep, he even reached for the crazy high notes of "Take on me... take on me... taaaake meeeeee oooooooonnn... I'll beeeeee goooooooooonnnne, in a day or twoooooooooooooooo!"

He was just one of many memorable characters I "met" along the course. There were so many people with powerful stories, told through photos and names and descriptions included on their t-shirts and sweatshirts and pinned on signs.

Medal of Honor winners. Trauma survivors. Brave men and women who served and sacrificed in all branches of the service. Children with cancer and beloved family members. There were so many stories that touched my heart... and yes, there were some tears along the way. I'm not ashamed to admit that. I felt honored to share the miles with all of them.

Near mile 10, I thought we would be making our way to The Mall. But no. We ran by it, but we veered off to run along the river. It wasn't until mile 16 that we came back to the business district, and just before mile 17, I made a quick stop to discard my running pants. I was warm enough to run in shorts, despite having what seemed to be the whitest legs of any competitor out there. 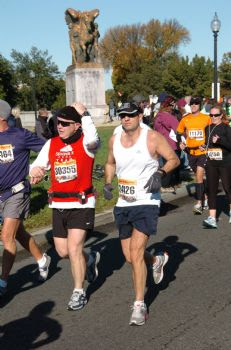 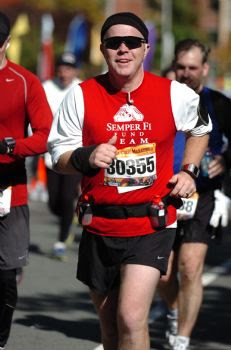 To this point, I felt great. We were steady on our pace and feeling strong. And we had trained up to a long run of 20 miles, so this was nothing new for us. And hitting mile 17 meant we were almost at The MCM Gauntlet. 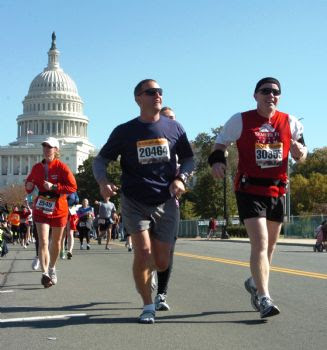 What is The Gauntlet? The Marine Corps Marathon requires an average pace of no less than 14 minutes per mile. In addition to that, there are two checkpoints you have to meet. The first is the Gauntlet, located at the start of the section of course along The Mall. The crowds were thick in this area, and the cheers and screams were so motivating. I felt so energized, like I could run all day long if I had to. And running by the Capital Building and past the Washington Monument? Absolutely incredible.

Finishing the lap around The Mall meant heading to the second checkpoint. Called "Beat The Bridge," it is located at mile 20. If you don't beat it, you get swept onto the follow bus. For me, hitting the bridge was my moment. It's when I realized that I was actually going to finish the marathon, that I could complete the run in the time left even if I had to crawl. And yep, I made Jerry stop for a water break and a quick photo while we were in the middle of the bridge. 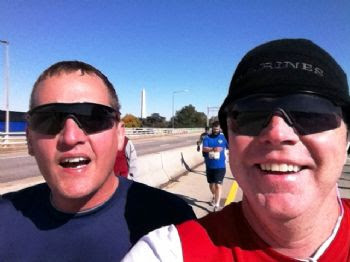 Up to this point, I was doing great. But we had never trained past 20 miles, so we were on all new ground. I had no idea how tough it was going to get from here.

Miles 22, 23 and 24 were an out and back through Crystal City. The crowds were super supportive, but my body was starting to push back. Since I ran the Tough Mudder last May, my right hip has been my weak spot on long, long runs. The marathon was no exception. More than once, I had to make a quick stop to stretch and twist and try to loosen up my muscles.

At this point, I had two things going for me. One, I knew that I was not going to quit no matter what. Two, my friend, Jerry. He simply refused to let me stop. By the time we hit mile 25, we knew that we could finish in less than 5 hours. But that meant that we had to keep moving. 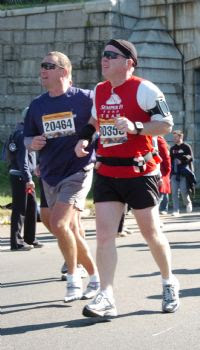 I had never seen anything as beautiful as the mile marker for mile 26, nor had I seen anything as terrible as the hill that we had to climb to the finish line. It felt straight up, and the crowds were pushing in so tight from either side that it felt like we could reach out and touch the spectators on either side of the course. 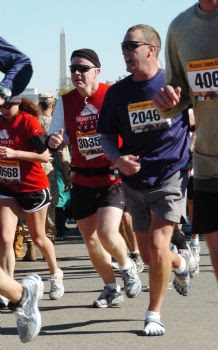 We dug in and kept running. I could barely lift my feet high enough off the ground to match the incline of the road, but my eyes were on the prize. And finally, with less than 40 seconds to spare, we crossed the finish line. 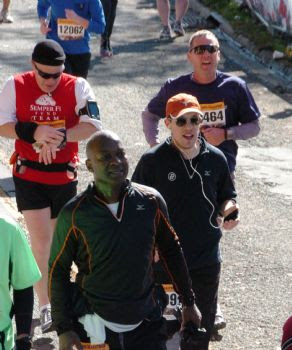 Yes, I ran the Marine Corps Marathon in 4:59:20. And I am proud of myself, grateful to my friend, and honored to have been part of "The People's Marathon." 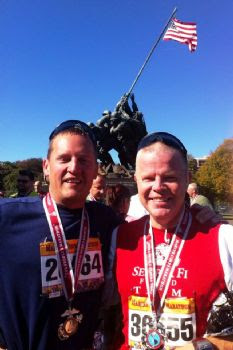 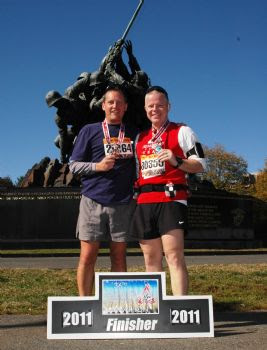