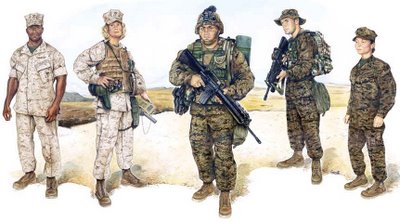 I would argue that the toughest job in all the Marine Corps is that of an infantry squad leader in combat. The mission of a Marine rifle squad is to locate, close with, and destroy the enemy by fire and maneuver, or repel the enemy's assault by fire and close-combat. The squad leader is responsible for the lives and performance of three four-man fire-teams. These Marines are the proverbial "pointy end of the spear" that routinely gets up close and personal with the enemy. Strip away all the politics, peel back all the strategic plans, get beneath campaign and operational planning, and what you have left, in its purest form, is foreign policy balanced on the shoulders of a squad leader in his early-twenties who is leading twelve other warriors even younger than him. (Matthew Dodd)

The Marines I have seen around the world have the cleanest bodies, the filthiest minds, the highest morale, and the lowest morals of any group of animals I have ever seen. Thank God for the United States Marine Corps. (Eleanor Roosevelt)

Email ThisBlogThis!Share to TwitterShare to FacebookShare to Pinterest
Labels: Military