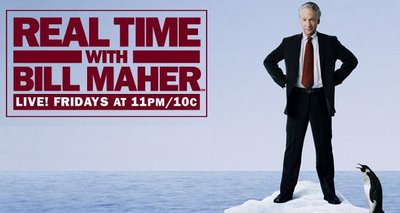 Sometimes, someone else just says it all so well. Thank you, Bill, for reminding all of us just how incredibly, completely wrong the neocon Think Tanks have been on the Iraq war. The transcript for Friday night's New Rules will be available in a day or so, but the video of the last four minutes is available now, courtesy of Crooks and Liars.

Maher: And finally, new rule in two parts: (A) You can't call yourself a think tank if all your ideas are stupid; and (B) If you're someone from one of these think tanks that dreamed up the Iraq War and who predicted that we'd be greeted as liberators, and that we wouldn't need a lot of troops, and that Iraqi oil would pay for the war, that the WMD's would be found, that the looting wasn't problematic, that the mission was accomplished, that the insurgency was in its last throes, that things would get better after the people voted, after the government was formed, after we got Saddam, after we got his kids, after we got Zarqawi, and that whole bloody mess wouldn't turn into a civil war, you have to stop making predictions.