National Coming Out Day – The Meaning 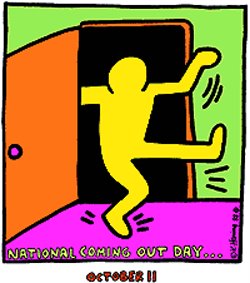 Today is National Coming Out Day, and each year I take this opportunity to examine how I am living my life as an out gay man. I like to think that I live my life with integrity, that I honor myself by being honest about who I am. Granted, being gay is only a small part of what makes me who I am, but it is important.

At this point in my life, thirty-nine years old and “out” for the last eighteen years, you might think that coming out would be only a memory. My family, friends and co-workers know, so who else is there to come out to? You would be surprised.

In fact, coming out is a lifelong process. I constantly have to make the decision to come out or not. And sadly, sometimes it feels like a “damned if I do, damned if don’t” situation.

For example, when I was car shopping, I stopped at a dealer to check out a few of their cars. I wasn’t ready to purchase, but I wanted to wander the lot and get a feel for prices, option packages, etc. Right away, I was approached by a salesman. We chatted a few moments, and I let him know that I was really just beginning the car buying process. During our discussion, I said something about needing a car for my new outdoor playing – meaning biking, diving, etc – and he asked me if I was looking for something with four-wheel drive. I replied that we already had a jeep for off-roading. At that, he said something like, “so does your wife drive the jeep, or are you looking for a car for her?”

And there it was. A simple conversation, with someone that I quite probably would never see again in my life, led to me having to out myself or not. I had three options – lie or play pronoun games, out myself as a gay man, or ignore the question and steer the conversation elsewhere. And no matter what I decided, there would be people to criticize my choice. I chose honesty. I replied, “no, my husband drives the jeep, so this new car will be for me.”

Or another situation. I took a job several years ago that required Ric and I relocate to Dallas, Texas. One of the first questions Ric had to answer in every interview was, “what brought you to Dallas?” Again, he could lie and start his new job with dishonesty, tell the truth and out himself to every potential employer, or dodge the question and make the interviewer wonder what Ric was hiding. Deciding to move halfway across the country and find a new job “just because” might seem brave at 21, but at our age it seems a bit sketchy.

Those are only two examples of having to choose to come out or not. Well-intentioned friends ask why it matters what other people think or know. It matters to me. As I said in the beginning, I try to live my life with integrity. Lying or hiding being half-truths is not the way to do that.

So on this National Coming Out Day, I remind my friends – straight and gay – that we all have an obligation to Live Out Loud. Be who you are without excuses and without apologies. Be proud of the person you are.

“One of the truest tests of integrity is its blunt refusal to be compromised."
Chinua Achebe (Nigerian writer)