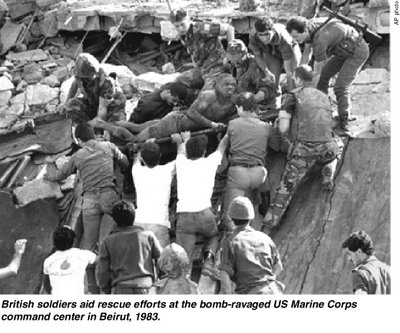 Tomorrow is the anniversary of the bombing of the Marine Corps barracks in Beirut. On that day, a suicide bomber struck the Marine Corps compound. The death toll was 241 American servicemen: 220 Marines, 18 Navy personnel and 3 Army soldiers. Sixty Americans were injured.

From Reference.com:
This was the deadliest single-day death toll for the United States Marine Corps since the Battle of Iwo Jima (2,500 in one day) of World War II. The attack remains the deadliest post-World War II attack on Americans overseas.

These Marines honor us with their sacrifice, and they, too, were the best and most honorable of us all.

Email ThisBlogThis!Share to TwitterShare to FacebookShare to Pinterest
Labels: Military