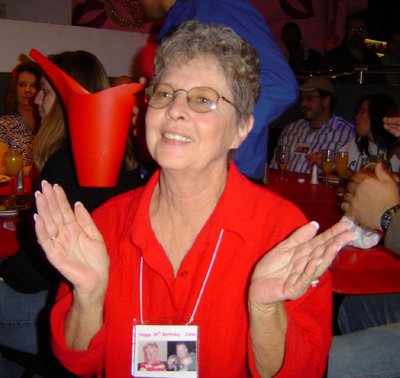 In response to my post about National Coming Out Day, my Mom wrote the longest blog comment ever recorded. It means a lot to me, so I decided to post it here on the blog itself. I am including other comments posted by friends, too.


My how time flies, doesn't seem like 18 yrs, & just look at you today. Your coming out doesn't really surprise me as on the day you were born, your one foot was the first thing out.

I remember when you told me you were gay. I cried, but not because you were gay, but because of the pain and troubles you were having. If I remember correctly, I told you, "if this is how you feel, please do not stay in the closet. The people that really love you will still love you. Being gay doesn't change the person you are inside." Do you ever remember me telling you this?

I should write a book about the experiences of having a gay son. They've been sad, funny and quite a learning experience. I have learned, not only about being gay but about love, friendship and support.

One of the most rewarding tasks I did was work with people who had AIDS. Actually being in their homes in Barstow, talking to their children and families. I never would have done this, if I only had a straight son. I could go on and on about this situation but your bloggo isn't about me, its about "coming out," making that one decision that will change your life forever.

Being in a closet is like being a spy, living that double life. Life is full of chances and as I have learned, it is up to you to bring happiness to your life.

I'm proud to be the mother of a gay son and the mother of a straight son. You know what, if you look deep inside their hearts, they are just the same, both loving, caring men.

I do want to share another experience I had with John, and that was my first trip to a gay bar. It was called B-Bobs and what a place. My first question to John was, "What if someone tries to put the make on me?" He said, "Don't worry mom, no one will." And you know what? They didn't, but I'm sure it had to do with the way he introduced me. When we walked in, he got everyone's attention and said, "Everybody, this is Mom and she's straight." So from there on in, I've been known as MOM.

That experience at B-Bobs also showed me another side of being gay. I met so many young and old adults that were alone, (so to speak). Their families wanted nothing to do with them, or they were in the closet when they were around family members. It was sad.

I guess the other great experience was riding in the San Diego Gay Pride Parade.

As a mother, I only want my sons to be happy and thank God they are. And the best part is they each have WONDERFUL MATES.

So if anyone is reading this and trying to make that decision and needs to talk, well "MOM" is more than willing to listen. I can be reached at sas110202@gmail.com. Just put in the subject matter "Mom" as I get a lot of junk mail that I never open.

Remember, coming out is not about making your parents happy or anyone else but yourself. We as parents have made our lives what they are, now it is up to you to pave your future and have the happiness you desire.

Believe it or not, some parents will come around, there are so many support groups not only for you but family.

One last little item. For a number of years I had been talking to a lady that worked at a cafe where we all had breakfast. One day I went to start my training for visiting AIDS patients and when I walked in, there she was. I was as surprised to see her as she was to see me.

She asked me what I was doing there, I explained since I had a gay son I wanted to be involve in some way to help people understand and cope with AIDS.

She made me promise not to tell ANYONE she had been there, as she was afraid if anyone found out she had a gay son, she would be fired. As I explained to her, that is part of the training, nothing goes outside the building. She explained to me that her son who lives in California was dying of AIDS. She was there because she needed to talk.

How sad that this lady was afraid of being fired because she had a gay son.

By the way, if you do make the decision to come out of the closet, and your mother is behind you, check with John and find out where he got me the T-shirt that reads, "My son came out of the closet and all I got was this lousy t-shirt." What a great conversation piece that is. And the attention it gets at a Gay Pride Parade is unbelievable.. .any one and everyone wants you in their pictures. What fun I had in LA that day... and John was no where around. But I was good enough to send him pictures... haha

Well I sure have been in a writing mood tonight so I best get off here.

I love you all, so does Jesse... We miss you.
Jeremy said...
Wow, what a great comment from Mom. That was really great. Really touching.
Tony said...
/grabs a bottle and 2 glasses, pours one for himself and one for Mom.
/with tears in my eyes and a choke in my chest

SALUTE!
John Hulsey said...
Thanks, Jeremy and Tony, for reading what my Mom wrote and posting here. As you can imagine, I am SO proud of her and unbelievably lucky to have her in my life.

And thanks, Mom. We have been through much, you and I, and I am blessed to go through this world with you as my Mother. I love you.

As night falls, my mind starts to wonder and NOW remembers the other things I wanted to add to your “Coming Out” bloggo.
For those trying to make this decision and worrying how it will effect your family, you would be surprised how many parents already know you are gay but do not know how to talk to you about it. Parents cannot feel that because you are gay, that it is something they did or did not do when they were raising you. Be sure when you are talking to your parents, you let them know this. I honestly think that the big issue here is how parents feel so “guilty” & completely blame themselves for having a gay child.
Having a gay child is hard on parents too, especially when they really do not understand how “their loving son or daughter” BECAME gay. You need to reassure them of the following:
· YOU DID NOT WAKE UP ONE MORNING AND SAY “TODAY I T
HINK I WILL BECOME GAY!!!!
· IT HAS NOTHING TO DO WITH YOUR UPBRINGING, ESPECIALLY IF YOU WERE RAISED BY ONLY YOUR MOTHER. (NO MOM, PLAYING WITH DOLLS OR THE POTS & PANS, DIDN’T DO IT)
· GOD MADE YOU TO LIVE A GAY LIFE. YOU WERE BROUGHT INTO THIS WORLD AS A GAY PERSON. WITHOUT EDUCATION, UNDERSTANDING, & RESEARCH, EVERYONE THINKS BEING GAY IS SOMETHING YOU JUST DECIDED TO DO.
· TAKE A LOOK BACK INTO YOUR FAMILY HISTORY & I BET SOMEWHERE, YOU HAD GAY RELATIVES. THEY WERE PROBABLY IN THE CLOSET & NO ONE COULD UNDERSTAND OR WANTED TO TALK ABOUT “UNCLE JOE.” BLACK SHEEP OF THE FAMILY… CRAZY MAN, KEEP HIM AWAY FROM THE KIDS, WHATEVER IS WRONG WITH HIM, HE COULD PASS IT ON.
If your parents are truly closed minded to your life, don’t give up on them. In time hopefully they will come around. Out of respect and love for family, bear with them, help them understand your feelings. Once they see how happy you are, it will make them happy. No one wants to see their children miserable.
My biggest fear when John told me he was gay was AIDS. At that time, nobody seemed to know much about AIDS only that it killed. This, too, could be a major reason why it is so hard to accept your gay child.
But I honestly feel “GUILT” is one of the main reasons for denial. I guess, John, you were lucky I had such an open mind.