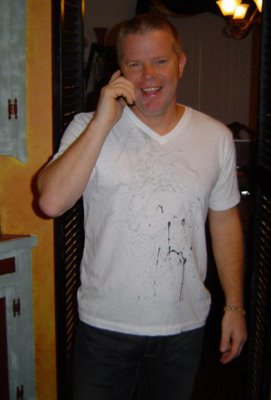 Last night was the first ever, soon to be semi-annual event know as “Dance, Dammit!” I invited the friends I know love to dance, and we made quite the night of it.

At the house, I got showered and shaved and dressed in my new cool jeans and fitted t-shirt. Robby and AJ were there, too, so we started the night off with a drink at the house. Ric had already promised to drive us up to Hillcrest, so we were good to go.

First, we needed food, so we grabbed dinner at Pick Up Stix. It was going to be a long night and we needed a little sustenance before we kicked it into high gear. Not long after, we were crossing the street and heading into Flicks. We snagged a corner table outside and we were off and running! Before long, we were joined by Brandy and Mark, Suzie and Michelle, Sonya, Kenny, and Mike and Verna. Our party was nearly complete.

At 10:00pm, we were ready to bounce. We made our way up to Rich’s and the dancing began. It was early enough that the club was still pretty quiet, so we had all the room on the dance floor we wanted. It felt great to listen to the music, surrounded by friends, and dance. It really has been too long since I did that, and it felt great.

Soon we were joined by my buddy JW, who clued us in to the fact that the DJ was also the club owner. No wonder the music was rocking! That was also important to know because, after I convinced AJ to get up and dance on the go-go boy pedestal, the owner was the one who told the bouncers to “leave him alone and let him dance up there.” Oh, the joys of knowing the right people.

Finally, my friend Vitaly showed up, and the evening’s guest list was complete. By this time the club was packed, and we were all getting crazy on the dance floor. We even sang Happy Birthday to our girl, Brandy. Granted, we had to do it by screaming over the loud dance beat, but we managed.

And then just like that, I was ready to leave. (More on that next.) I walked out of the club to find Brandy and Mark still walking around, looking for the keys. I dashed back into the club, picked up the keys from the “back in the dark corner of the rail” spot, and brought them out to Mark. Definite relief for him.

And then we were off again. Robby, AJ and I hopped into the truck and headed over to Zombie Lounge. The band was loud and the drummer was fierce, but one drink there was about all we could handle. We hopped back into the truck, made a beeline for Brians’, and had a much-needed late night dinner.

All and all, it was a great evening. It was relatively drama-free, as was my hope, and it really did feel great to be surrounded by so many friends. I think I need to make this happen more often.