A Sailor, a Seal, and a Hero 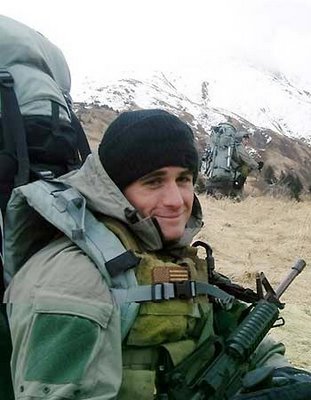 Navy Seal Falls On Grenade To Save Comrades

Seals at the Coronado military installation report that one soldier, Petty Officer 2nd Class Michael A. Monsoor, used his training, courage, and selflessness, to save the lives of his comrades by throwing himself atop a live grenade tossed by an Iraqi insurgent, which took his life.

While posted along a rooftop in Iraq, Monsoor and an undisclosed number of fellow Seals, positioned themselves for sniper duty when a live grenade landed in their position. The explosive first his Monsoor in the chest and then rolled to the floor. The Seal then quickly lunged atop of the grenade softening the explosion for his comrades and ending his life.

In an interview with the press, four Navy Seals discussed the heroic actions of Monsoor but withheld their names because of the secrecy of their work.

"He never took his eye off the grenade, his only movement was down toward it," said one of the soldiers whose life was saved. He did not, however, walk away unscathed. He took shrapnel in both legs.

"He undoubtedly saved mine and the other Seals' lives, and we owe him."

Monsoor, who was killed in Ramadi, a city west of Baghdad, is the second Seal to die in Iraq.