Steve Irwin, the hugely popular Australian television personality and conservationist known as the "Crocodile Hunter," was killed Monday by a stingray while filming off the Great Barrier Reef. He was 44.

Irwin was at Batt Reef, off the remote coast of northeastern Queensland state, shooting a segment for a series called "Ocean's Deadliest" when he swam too close to one of the animals, which have a poisonous bard on their tails, his friend and colleague John Stainton said.

"He came on top of the stingray and the stingray's barb went up and into his chest and put a hole into his heart," said Stainton, who was on board Irwin's boat at the time. 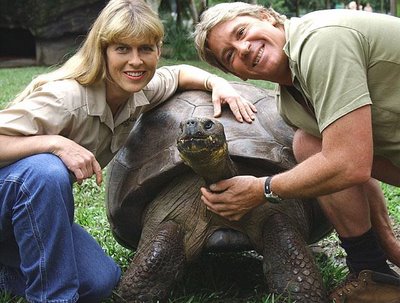 This news is incredibly sad to me, and I know that my Mom is really upset. Steve Irwin was always a favorite of hers. But his passing reminds me of one of my favorite sayings:

Life should NOT be a journey to the grave with the intention of arriving safely in an attractive and well preserved body, but rather to skid in sideways, chocolate in one hand, martini in the other, body thoroughly used up, totally worn out and screaming "WOO HOO what a ride!"