Everyone that knows me knows that I am just usually comfortable in any situation. I have straight and gay friends, and I enjoy hanging out in both kinds of bars. Last night, though, was such an experience in contrast that I have to talk about it.

After a long day at the office, followed by hours of bathroom repair, Ric was finally ready to go out for a few beers. Grant dropped us off at The Eagle, then grabbed a cab and joined us a bit later. Ric and I had a few beers, talked with some friends and met some new folks, then grabbed a cab and headed home. Just another night out with gay men and some folks in the leather community.

After we got home, an exhausted Ric crashed out right away. (Apparently spending a whole day mixing concrete is tiring.)

Anyway, my friend AJ and I exchanged a few text messages, and he decided to come by and take me out for another drink. We went just a couple of blocks away, to The Zombie Lounge. It is the coolest bar. It's a straight bar, and everyone in there has about a zillion tattoos. The music is completely crazy, from Patsy Cline to punk rock to Tony Bennett. Very cool. 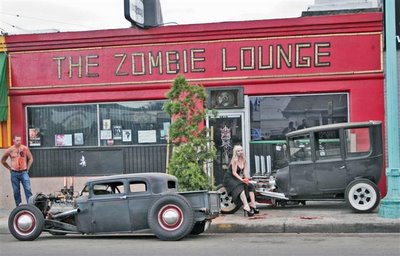 I had a couple of drinks, plus a shot that some cute blonde girl ordered for me. And I fell madly in love with the bartender - Pammy - who is originally from the West Bank of New Orleans. She is a tattooed sexy lady who could not have been nicer to me and AJ.

So there is the contrast of the night, and I really enjoyed both bars. I can't imagine any of the folks at one bar being comfortable at the other, but I was. And I like that.

(And a special thanks to AJ for drinking only Diet Coke and being my designated driver!)