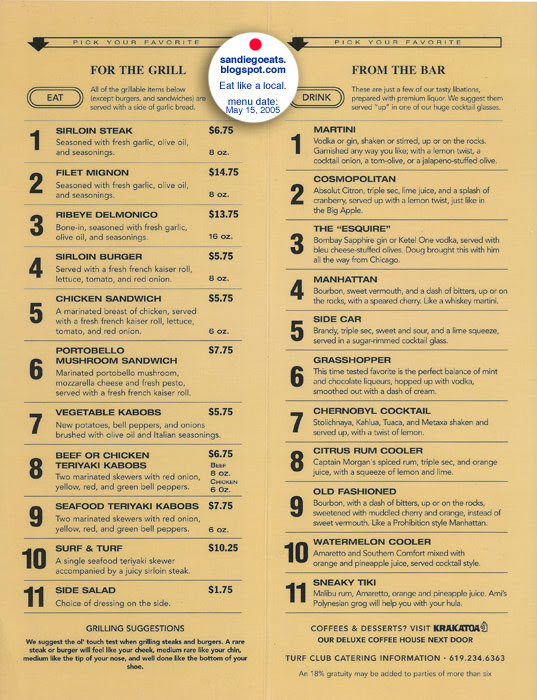 <-----The menu (mostly steaks and cocktails)

Last night was Date Night, and it was my turn to choose a place. I found a totally cool local bar and grill... literally, a grill. It's called the Turf Supper Club, and they have a big grill inside where you cook your own steaks. Well, actually, I made Ric cook my steak (of course!), but he likes being King of the Grill guy.

The place was a lot of fun, but I imagine it gets quite crazy when the restaurant is full. The grill is good size, but not nearly big enough for all the people that fit inside.

After dinner, we wandered over to Pec's for a beer and some Padres' baseball on the big screen. It was a heartbreaker game, with the Cardinals pulling out the game with a shot that rocked the stadium. Ack. It was terrible. After that (damn you, Pujols!), I was ready to call it a night.

Not the most exciting date night, but we enjoyed it. It was nice to chill out over a lazy dinner and a few beers. Next week will be more of a romantic evening out, but sometimes you just want to be a couple of guys with steak, beer and baseball. (Wow. I sound like a lesbian.)