Last night was definitely one for the record books. My buddy, Austin, called yesterday to talk me out of a trip to the gym and into a dive at La Jolla Cove. It took very little arm-twisting to convince me. We set out with one goal – see a Giant Sea Bass. What is that? Let me quote from Garry McCarthy’s website:

Once common off Southern California and its offshore islands, the grand size, mild taste and gentle nature of the Giant Sea Bass led to their being hunted to near extinction. Most divers in Southern California today have never seen one of these great fish, which can reach 7 1/2 feet long, weigh up to 600 pounds and live almost 100 years. Fully protected in California since 1982, Giant Sea Bass appear to be finally making a slow comeback.

We were in the water less than twenty minutes when we found the bass. There were three of them hanging out in the kelp, and they were incredible to see. They are truly giant, and seeing them up close like that was such a thrill. 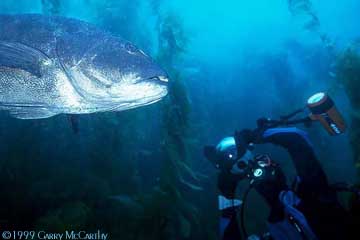 Click here for a video. It is NOT US, but it was filmed by other divers yesterday morning. It shows the smaller sea bass out in the cove, along with some other creatures typical for that area. Enjoy! (And thanks to Volker Kilian for the cool footage.)

And the record books? With the relatively shallow depth of less than thirty feet, we were able to stay underwater for over an hour. Yes, folks, I have now made my longest dive yet at 70 minutes! (And we still had air left, but decided that we had been under long enough.)